D - That's why they make sweaters in New Zealand.  They have sheep and they have button trees.

Describing why I particularly like a photo of his -

M - It's dramatic yet subtle...   intimidating yet quiet and thoughtful.

D - Maybe this doesn't deserve the bad rap I've always given it.


(Dinner did not come with many options.  Last weekend D assessed my sedentary ways and accused me of being "too typical" a housewife.  I countered that the best way to dispel such inevitability was for me to stop cooking dinner so much.  He's had to make dinner for the past four days.  It's been epic.  Tonight - Waffles and Sausage, or Sausage and Waffles.  No Eggs!!!)

And now, for more pictures than I've ever put in one post...

Craters of the Moon National Monument and Preserve.

D and I did a three day backpack.  We did the same thing in April last year, but the snow pack was huge and snowshoes were involved, and our three day became two days after we lost spirit.  (And because essentially all backpacking in Craters is off trail, and besides the little adjustments to avoid particularly nasty lava flows you pretty much just pick a line and go in that direction, it makes cutting things sort, perhaps, a little too easy.)

This time we loaded GPS coordinates of several interesting landmarks into D's device and tentatively headed for one of them each day, with lots of time for wandering around and finding good campsites in between. 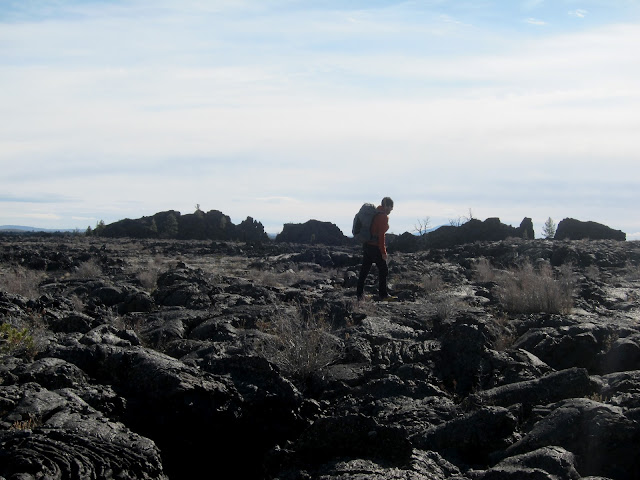 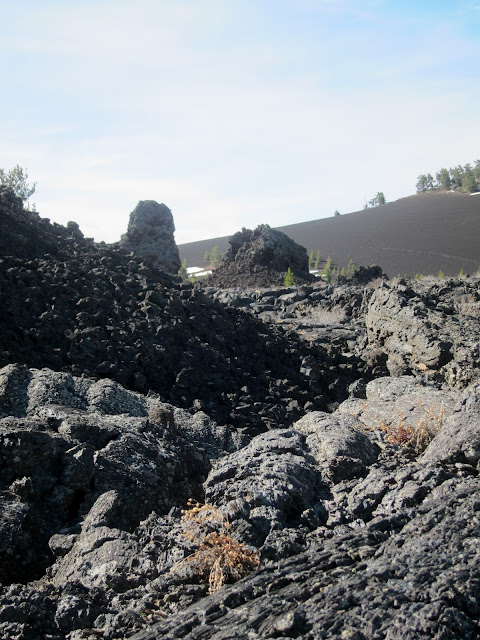 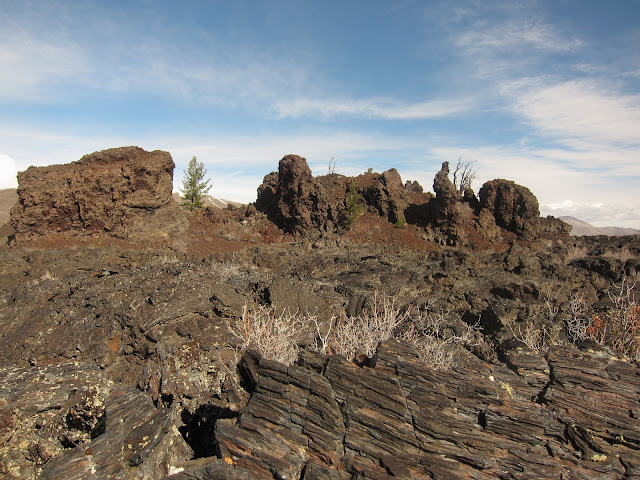 You can occasionally find easier walking in between the lava... 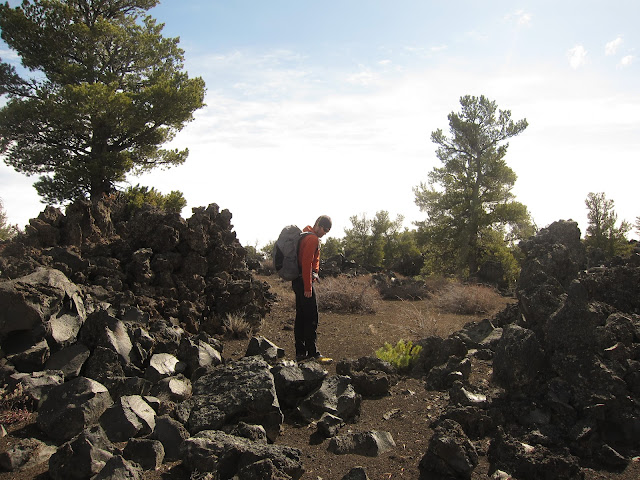 Harder walking, right over the top. 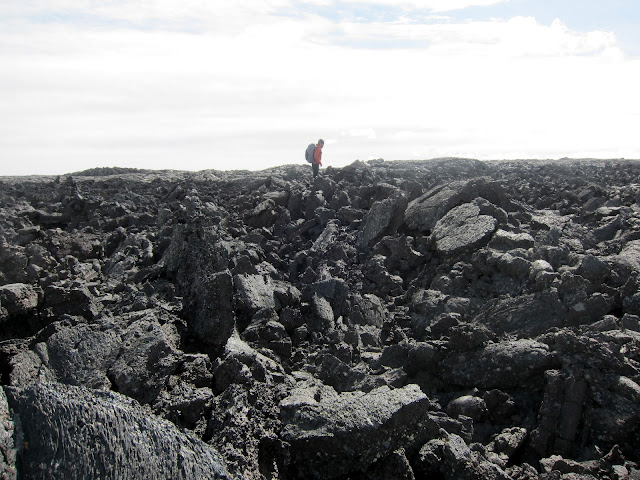 Despite essentially covering similar ground we saw many neat lava features we didn't see before, and didn't see many neat lavas features we did see last time.  I believe, if you were to walk a line of latitude straight across Craters, and then move 300 yards north or south and walk straight across it again, your experience would be completely different.  The smallest changes in the nature of the lava change how you hike so much, and the lava just changes constantly, there are so many variations.

All of the lava however, works your feet!  I never take my shoes off while hiking, but in Craters, exceptions were made.
Shoes off break. 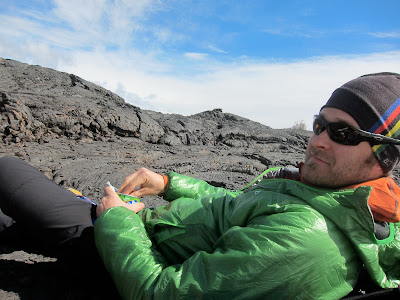 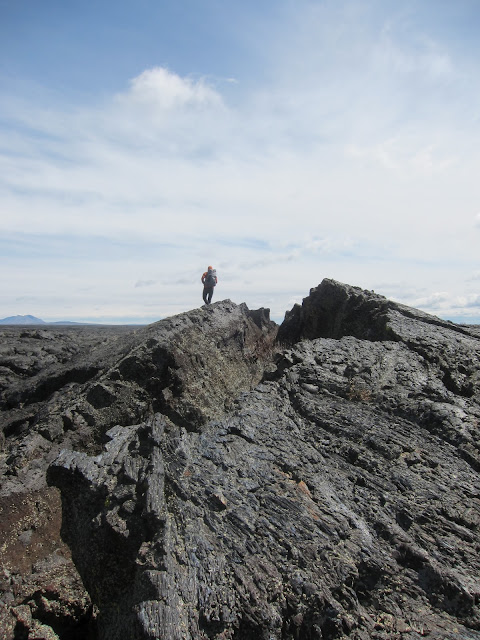 As the map says - Crack. 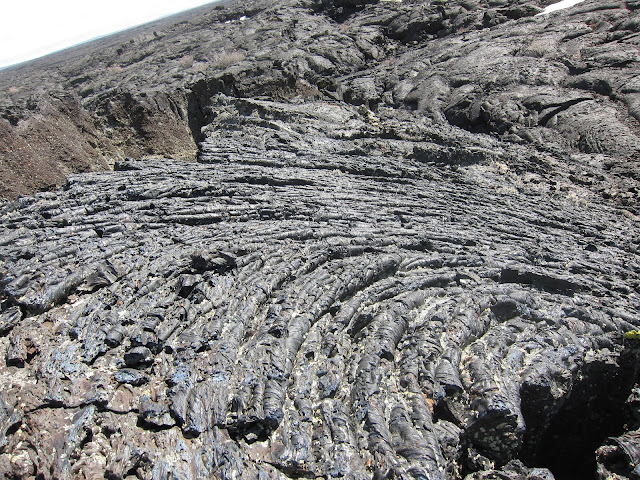 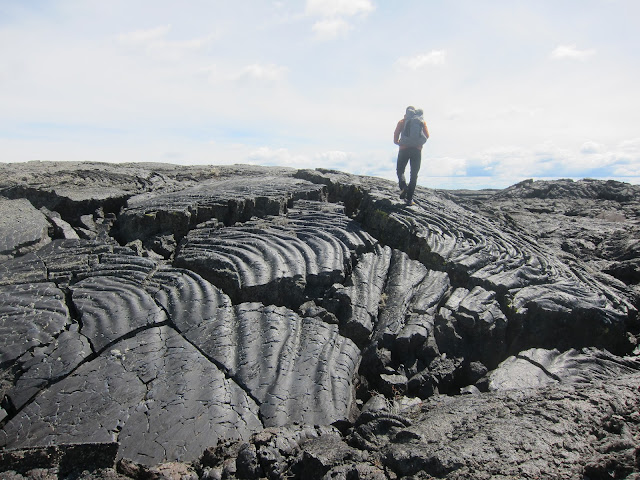 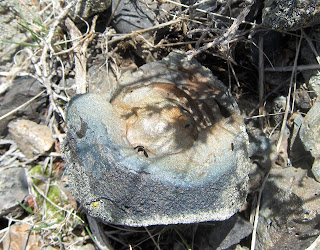 (Maybe this is where I should mention that it was stunningly cold both nights, which led to me getting maybe 2 forty five minute naps the first night, and maybe 3 the second...  our conversations were not groundbreaking...) 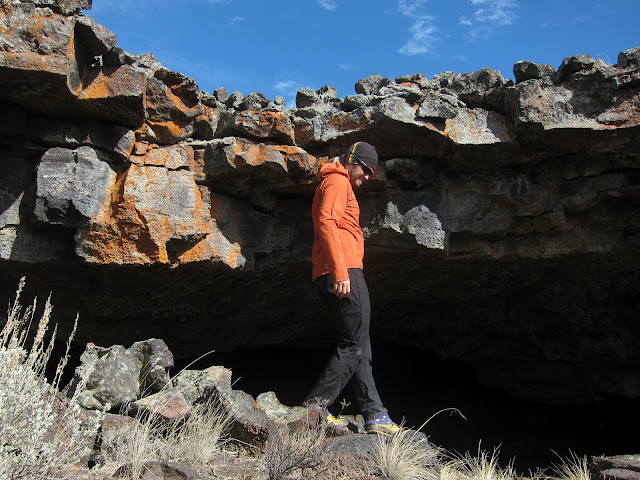 Found.  The Bridge of Tears.  D descends one side. 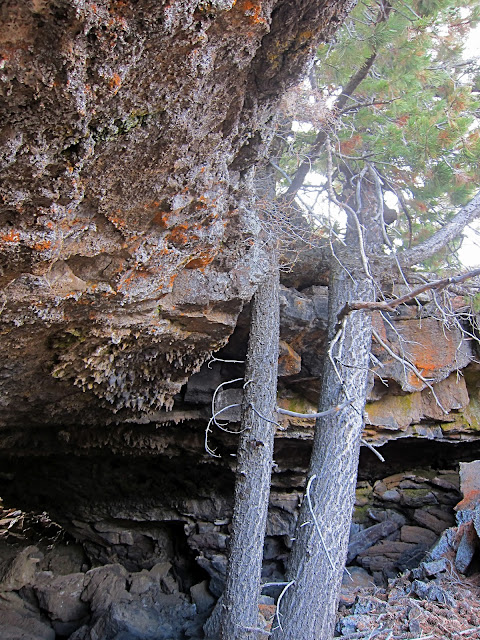 Trees on the edge of the other side of The Bridge. 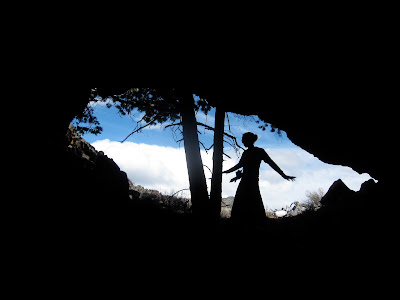 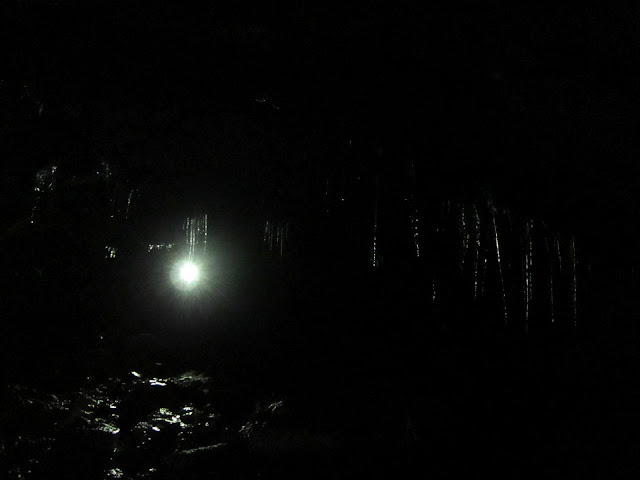 D's light reflecting off icicles under the bridge. 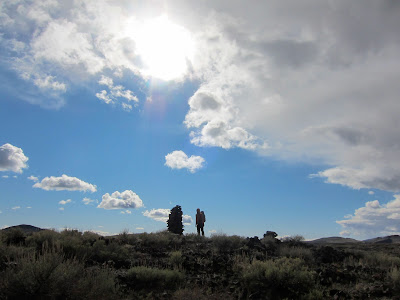 The 6 foot tall cairn we somehow missed last year when we tried to find The Bridge...  not sure how that happened as it is situated on the highest bit of ground around the bridge and is therefore viewable from about 3 miles away...  the small cairn in the photo below is sitting on top of the bridge.  Which makes it pretty easy to see why GPS coordinates help with the locating. 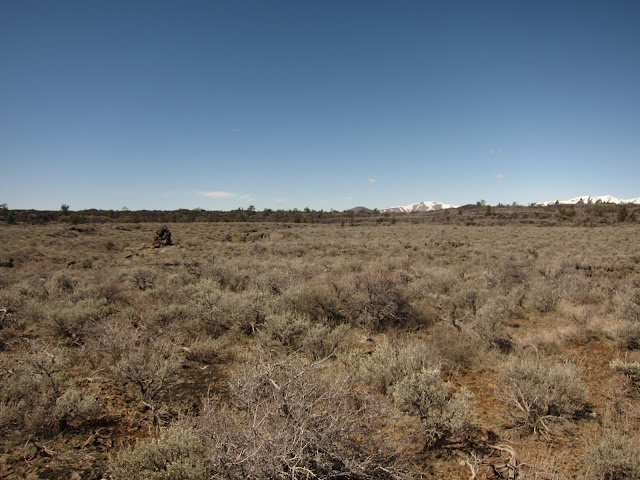 (It should be noted that bridges in Craters are usually formed when two sides of an underground cave collapse, leaving the roof of the middle of the cave a bridge.  Not exactly Canyonlands here...) 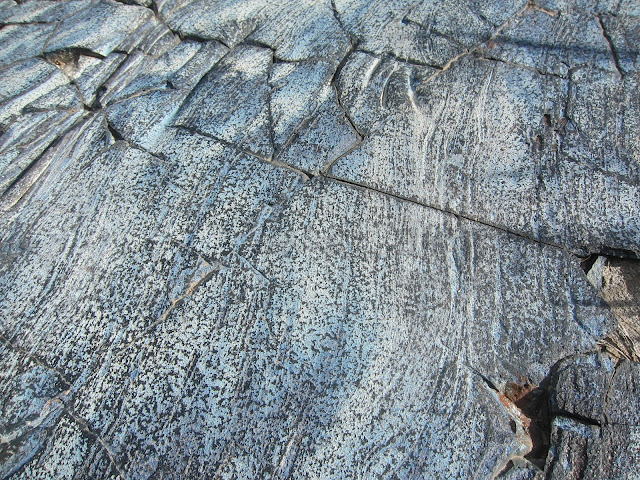 Lava.  Above is Pahoehoe.  Below is Aa.

I like to pronounce Aa as "AAAAAHHHHH" because that is what goes through your mind when walking through/over/on top of it.

When plotting a trip to Craters on the map, "Prairie" and "Pahoehoe" are your friend :) 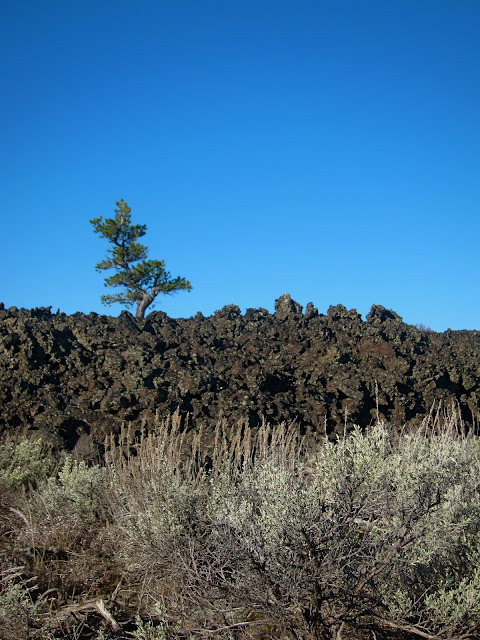 Besides the lack of comprehensive snow cover, there were a few of these darlings peeking out.
Exceedingly more spring like than last year. 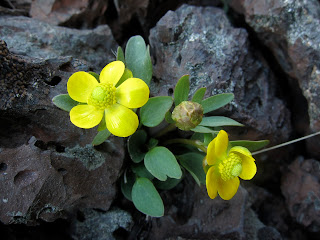 If you can find smooth enough lava to not constantly be watching your feet, there are pretty much constant mountain views. 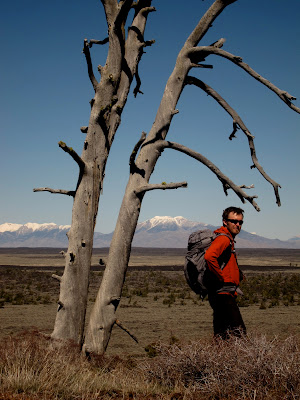 The second night we hiked up the cinder cone next to our campsite as the sun set. 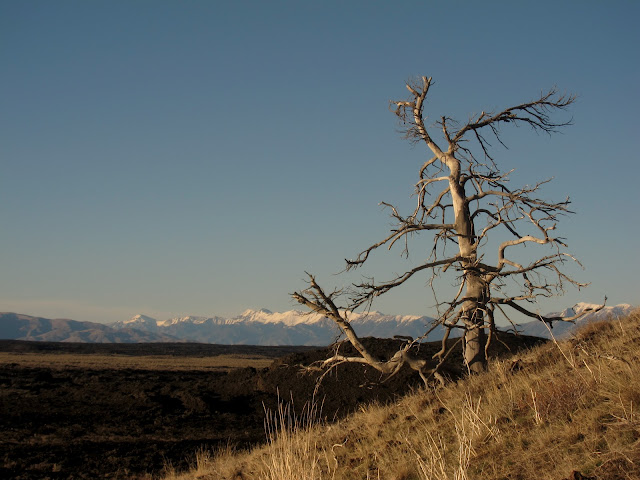 Spot the green tent below.  At the edge of the sage fields and near the cinder cones and buttes you can find patches of cinder beach which makes for nice camping. 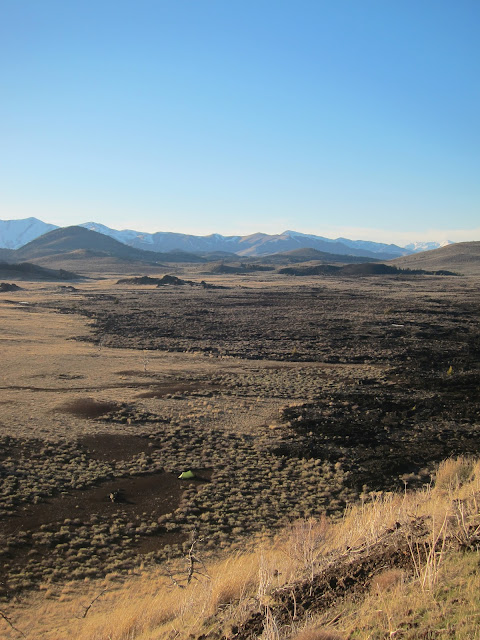 The view from the top, looking out over a lava flow. 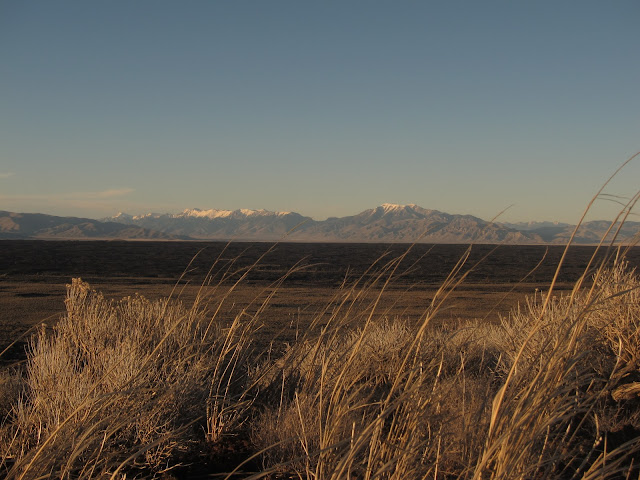 D surveying.  You can see a few snow patches in the lava field below.  Snow being the rare water source at Craters, makes backpacking trips during this time of year a necessity, unless you like carrying all your water with you. 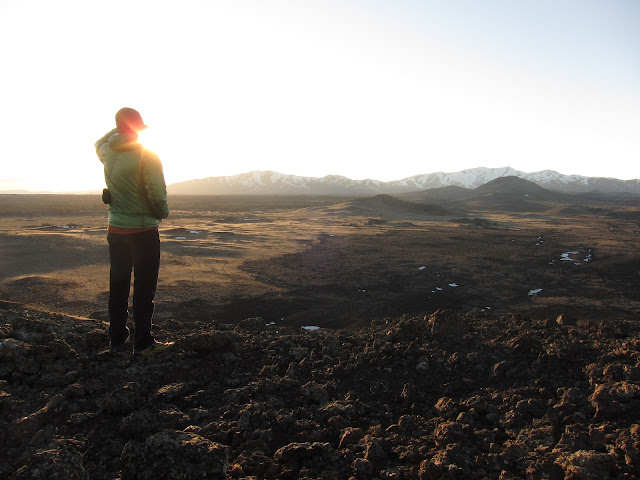 We stopped at a nice looking snow patch in the afternoon on the second day.  Where we had a shoes off break, ate, and melted a lot of snow :)

The moon was bright and out early in the evening. 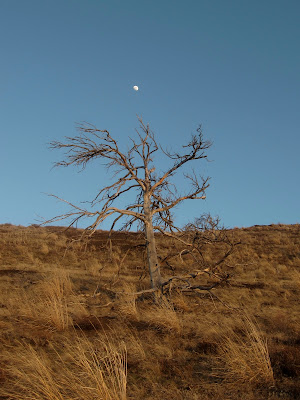 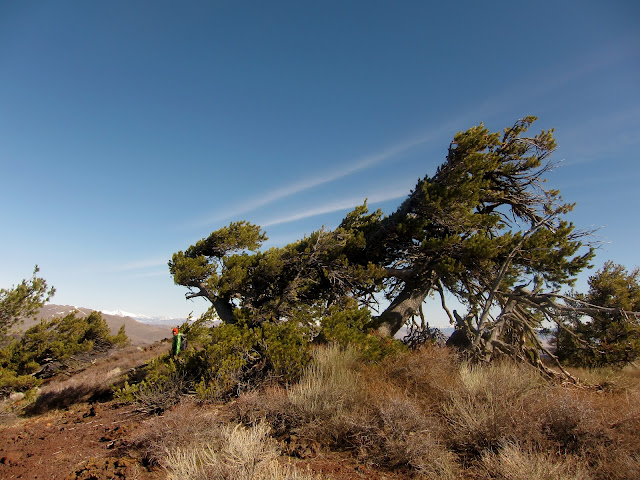 On top of another cinder cone on day three, we were treated to some seriously wind blown trees.  Even when the sun is shinning full force, Craters is often freezing cold from the wind.

This is Idaho sunbathing - 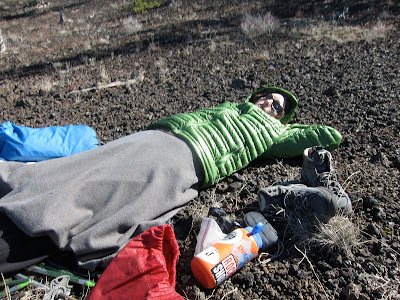 Toward the end of the third/last day, we intercepted some established trails.  This is D showing what the tree would have looked like before the lava surrounded it thousands of years ago.  He's standing in a Tree Mold that would have covered more than just his knees, except there was at least a foot of snow in the bottom. 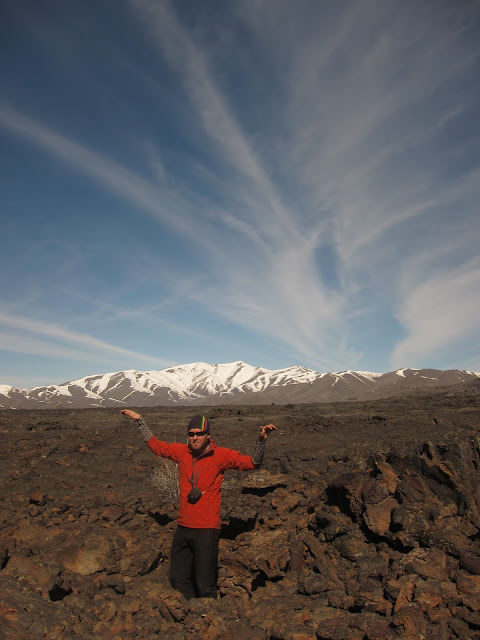 We finished around 1pm on Day 3 as we desperately needed burgers, and there was an 8 hour drive home awaiting us (including an ice cream break at The Big Dipper in Missoula).

At that point where we were almost at the car, but had just far enough to go that you still have to pay attention I started thinking about the most abusive places to hike...  and decided to re-establish the DefCon system, which in my mind was more like DeathCon, which switched to DeathHike...  like - "Oh, my gosh, we've hit DeathHike 2!"  Except I thought that instead of each level having a number it should have a place...  and based on my own personal hiking experience, this is how it played out -
DeathHike 1 - Grand Canyon
DeathHike 2 - Craters of the Moon
DeathHike 3 - Death Valley
DeathHike 4 - Zion
DeathHike 5 - (I was going to say Yosemite, but only because of a particularly abusive hike where I barely ate all day and vomited multiple times on the trail...  sorry if you happened to be one of the people waiting outside the pizza place at Curry Village...  that couldn't have been pretty...  but the conversation devolved at this point and I never decided for sure...)

D did a post too...  but he's also doing a write up for BackpackingLight.com so he wasn't his usual verbose self.

While Craters certainly deserves time and attention, and one trip is not quite enough to see everything, I do think D and I have reached that nice, thorough level of understanding with Craters.  Neither of us left, dreaming of what we'd do when we go back.  I'm sure we'll go back... and I'm sure Craters has many more secrets yet to reveal to me, but I'm left with a satisfied feeling that will keep it low on the To-Do list for a few years.
Not a bad thing.

I adore Corned Beef.  I call it Meat Candy.  Starting when I worked at a Kosher style deli at 15.  We would get in the full brisket, shave off the top, fattier, chunk to use in reubens or other warm sandwiches, the fat melting and keeping the meat from getting dry.  The leaner sections being trimmed up, by hand, in store.  I did my best to be an expert at slicing the meat so thin it should have fallen apart, but didn't.

When I moved (both to other work and to other places, particularly small towns) I gave up, to some extend, on having corned beef all together, because what's the point in getting the sort of stuff they have at Safeway...  it will pass if all else fails and you can get the attendant to cut it thin enough...

At some point a few years ago, I noticed all the briskets for sale around St. Patty's day.  I had never thought of getting one before, because the thing in the store looked so much different than what I had handled at the deli.  The pieces were all considerably smaller and I didn't quite believe they were the same thing...  or what to do with them if they were.

Research commenced.  The internet is an amazing place.  I read up on several variations for cooking them and went for it.  And it was good.

The last few years, around St. Patty's day I stock up on brisket, usually buying a dozen or so, and freezing them for the rest of the year.  A few days after the holiday, most stores will have them on sale for $1.50 to $2.50 a pound, which makes it seem slightly less ridiculous when I buy 40-50 pounds worth at once :)

Sometimes I just cook it and have it with whatever, but if I'm in the mood, or having guests, I make my version of Corned Beef and Cabbage.

It's all very healthy...  anyway, I'm going to follow this with two posts, one on making the Corned Beef itself, and another highlighting the way I do the potatoes, carrots and cabbage to have them all come out perfectly together.  The corned beef takes 2 hours per pound, so the 2-3 pound chunks typically for sale in the grocery is a 4-6 hour affair, plus another hour after it comes out of the over to finish the potatoes and whatnot.  It may not be quick, but it's super easy.  It takes about four minutes to get it ready to go in the oven, so if I'm going to be home during the day it's not really THAT much work - And - the oven temp is just 250 F so it doesn't make the kitchen seem hot (if you're living in an older, rented home, and don't have a super new, well insulated over :)

And it plates beautifully... 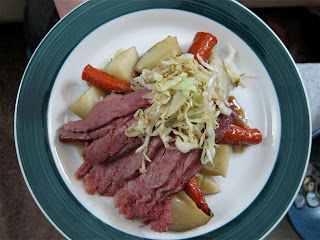 Previous owner of Selma Lee the '77 Mercedes Diesel. Now being cold a lot, so my hubby can play around in Grad School in The Great North.

Watch out for bears!!!

The Way it Was.